Without civility, our system doesn’t work 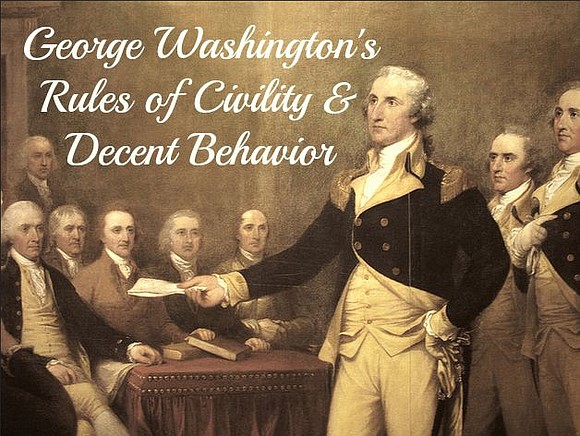 When he was just a young teenage schoolboy, George Washington sat down and copied out 110 “Rules of Civility & Decent Behavior.” Many of these had to do with simple manners. “Cleanse not your teeth with the tablecloth, napkin, fork or knife,” reads Rule 100. Good advice at any time.

But the first rule the future president wrote down and followed for the rest of his life was especially notable: “Every action done in company, ought to be with some sign of respect to those that are present. ”There are times when I find myself wishing that all of us — public officials and ordinary citizens alike — would adopt the civil behavior of that particular teenager.

Our politics today too often is strident and polarized. To put it mildly, we do not always show respect to those present, as Washington did, and try to make them comfortable. Often, it’s just the opposite. We live in a polity that seems to reward in-your-face rhetoric and confrontational behavior.

Yet civility — respecting the rights and dignity of others — uplifts our common life. It makes engaging in politics more pleasant, more appealing, and ultimately, more fruitful.

I’m well aware that calls for civility in the past have been used by political “haves” to try to rein in those seeking entree to power. And Americans have an interesting, conflicted view on the topic. On the one hand, a Georgetown University poll found last fall, Americans across the political spectrum “agree with the premise that our political culture has become too uncivil and lacks a focus on solutions, and that common ground and compromise should be the goal for political leaders.” Yet they often tolerate, if not encourage, incivility, and want their leaders to “stand up to the other side.”

But stressing respect for one’s opponents does not mean we need to agree with one another. Far from it. At its heart, our system was built as a means of managing disagreement without coming to blows. Treating one another civilly is how people who don’t agree still manage to weigh issues carefully and find common ground. The founding fathers did not expect all Americans would become friends, but they did expect that we could all be respectful and civil to each other.

And there’s no question that incivility has consequences. It makes the work of democracy more difficult: building consensus, reconciling competing views, enticing ordinary Americans to give up some of their private lives to devote themselves to the public good. It makes key institutions like Congress less effective. Walking into a room or chamber where the differences are sharply drawn and finding a way to bring people together is political skill of the highest order. And it’s pretty much impossible to exercise without civility.

Where many of us grew up — and still, to this day — talking easily, comfortably, and courteously with one another is the way we resolve our problems. Especially at the state and local level, political leaders mostly recognize that they have a responsibility to respect the dignity of the people they’re bound to encounter on a regular basis.

This is not always easy. Civility takes discipline and patience. Especially when faced with incivility, the temptation is to lash right back. But aside from some kind of momentary satisfaction, it’s hard to see how this is an effective tactic if our purpose is to get things done.

Because in a democracy like ours, the key challenge is to foster a debate that respects all voices, even those of dissent and protest, and create an environment that enables the agreements we need to advance the common good. The future and the effectiveness of our representative democracy require that we get the balance between civility and dissent right.

The reassuring thing is that bringing this country closer to the political behavior that George Washington had in mind is not a matter of enacting laws or passing new regulations. It’s simply a matter of encouraging respectful behavior, one person at a time. If we can do that and reverse the course we’ve embarked on in recent years, then we can still show that a government of, for, and by the people works.