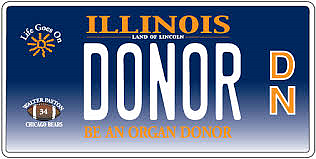 Secretary of State Jesse White unveiled a new ad campaign featuring a woman whose life was saved because of organ donation when she received a heart from a friend’s daughter.

“Nikki’s mother, Vicki Walker, experienced the unexpected and tragic loss of her daughter,” said White. “But in her time of deep sorrow, she thought of Tanisha, someone who was in great need of an organ transplant, and that loss turned into a second chance at life for Tanisha. Vicki says that being able to hear Nikki’s heart beating inside her friend gives her great comfort.”

In the public service announcement (PSA), Tanisha says that prior to the donation, doctors told her that her situation was serious and that “the only way I was going to go home was with another heart or in a body bag.”

Currently, there are more than 6.9 million people registered to become organ/tissue donors in Illinois and approximately 4,000 people are on the waiting list. About 300 die each year waiting for an organ transplant.

The PSA airing now encourages people to enroll in the Secretary of State’s Organ/Tissue Donor Registry. The television, radio, digital display and social media ads will run in English and Spanish statewide throughout July. The commercial will also be played on some movie screens throughout the state.

To view the PSA, visit ww.LifeGoesOn.com.

“We encourage all Illinoisans to join the organ and tissue donor registry,” said White. “One person can improve the quality of life for up to 25 people.”

Illinoisans can register with the Secretary of State’s Organ/Tissue Donor Registry at www.LifeGoesOn.com or by calling 800-210-2106.