New Romeoville trails are rolling along 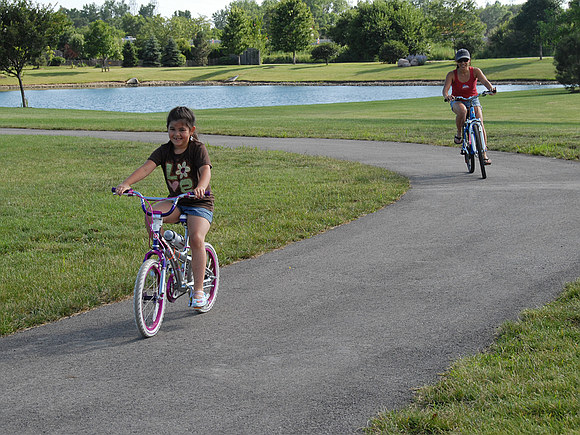 There are 5.3 miles of new bike paths coming to Romeoville via two previously announced projects. These join the more than 30 miles of paths that already run through the village.

“These two projects will be a big addition to Romeoville’s network of bike paths and trails,” stated Mayor John Noak. “They also connect to an expanded network that allows you to reach other communities. For example, the Centennial Trail connects to Lemont and Willow Springs.”

The 3.1 mile ComEd Bike Path will begin on the west side of Weber Road and angle southwest to Airport Road. A branch of the pathway will also extend to the I-55 Frontage Road. Bids are currently scheduled to be accepted beginning in November, followed by construction and a Spring 2021 completion.

The NGPL Bike Path will start near the Village Place Apartments on Normantown Road and will link up to the existing path along Taylor Road. This path will be 2.2 miles long and bids on the project will be accepted starting July 31, with construction to begin shortly after. It will likely be completed this fall.

In addition to the bike paths named above, two pathways are in the plans that will run near Weber Road. One will originate at Romeo Road and go north along the west side of Weber Road, cross onto the median at the I-55 interchange, then jump to the east side of Weber and continue north until it meets up with the paths along Lakeview Drive and Windham Parkway. Another sidewalk will go along the east side of Weber Road for the length of the project and will join with the path in the median of the interchange. Crosswalks on Weber will be located on the south side of Romeo Road, the south side of Normantown Road, and within the interchange at the traffic signals located there.

For more information on the existing network of paths in Romeoville, visit the Parks & Recreation page on romeoville.org.