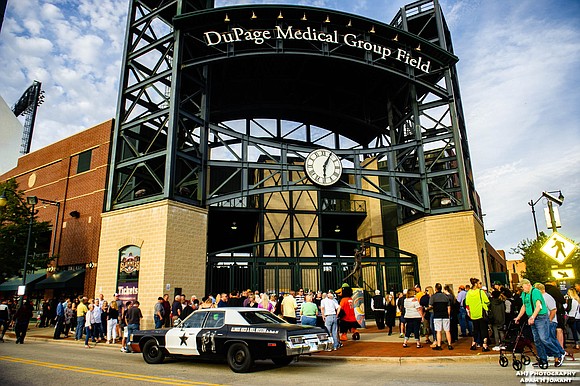 It now appears baseball games will resume in July in downtown Joliet as the Slammers have announced plans to play in the Championship Cup series at DuPage Medical Group Field.

It would appear Minor League baseball is coming back to downtown Joliet in July.

The Joliet Slammers’ organization on Wednesday announced the team will participate in the inaugural City of Champions Cup at DuPage Medical Group Field beginning July 16.

Here is an excerpt from a story posted on the Slammers’ web page.

“Four teams will compete for the Cup, all playing a 27 game schedule each at DuPage Medical Group Field from July 16 through September 6. The teams will be made up of players drafted from the ranks of Frontier League players unable to play for their current teams and free agents from MiLB affiliated teams.”

Due to the ongoing Coronavirus pandemic, the Slammers have not played all season and the stadium in downtown Joliet has remained silent. The organization is currently in talks with the City of Joliet working out a plan for rent relief.

The Joliet Stadium Committee was expected to meet this week to discuss a rent relief proposal submitted by Slammers’ President Nick Semeca, however the meeting was cancelled.

The Slammers organization pays the City of Joliet $75,000 in two installments annually per year in rent. However, with no games and no tickets sold, there has been no revenue generated to pay rent to the city.

Whether the announcement of the Champion Cup games starting next month will mean the Slammers will then start paying rent to the City remains to be seen. It would appear that it is in line with the request submitted by Semeca. However, that request has yet to be approved by the Joliet City Council.

Semeca’s focus right now is on the upcoming games. “We are expecting a very high level of talent to be on the field for the Slammers and the other three teams,” said Semaca, who is the majority owner of the Slammers.

The names and more details on the three new teams, all of which will also be based in Joliet, are expected to be released by the Slammers shortly. Each team will play three to four home games per week in a schedule that generally will include night games on Sunday, Tuesday, Thursday, Friday, and Saturday with additional ticketed day games on Saturday and Sunday afternoons.

Under the recently released guidelines from the State of Illinois regarding spectator sports, fans will be allowed to attend the games. The Slammers will be the first baseball team in the state to host professional baseball games with fans in the stands this year, according to team officials. A number of operating changes and new protocols will be implemented to minimize any potential risks from the spread of COVID-19, officials said.

Under State guidelines, games are limited to crowds at a 20 percent capacity so tickets will be extremely limited. The 27 game “Cup Pass” tickets are available now by calling (815) 722-2287 and individual game tickets will be available for sale to the general public at a later date, if any remain, after the Cup Pass sales window has ended.

“We are proud and excited to be able to bring the baseball fans of the entire Chicagoland area an opportunity to see the sport we all dearly love, to enjoy a hot dog and cold beer on a summer night. We can’t wait to see our fans back in the stadium” Semaca said.