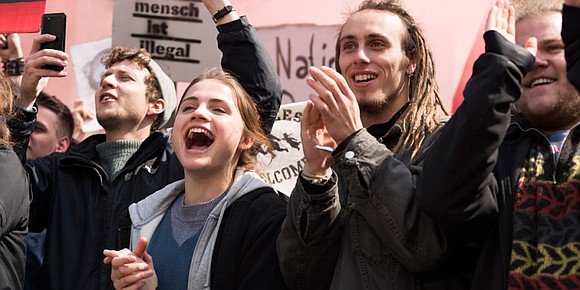 Livestream with Filmmaker Q and A with director Julia von Heinz

German filmmaker Julia von Heinz directed and co-wrote (with John Quester) this chilling and highly graphic account of democracy on the brink of anarchy. Sound familiar? That’s exactly the feeling you get in this pulsating drama, filmed in explosive detail by cinematographer Daniela Knapp punctuated by a sparse score by Matthias Petche (with an operatic aside from Chicago’s very own Lyric Opera soprano Sondra Radvanovsky singing Pace, Pace Mio Dio from Verdi’s La Forza Del Destino). The film follows Luisa (Mala Emde), an idealistic, upper class law student who joins the Mannheim antifa underground. Peaceful protest quickly escalates to explosive violence. Mayhem follows. Along the way we meet a pensive Lenor (Tonio Schneider), who vouches for Luisa in the commune, and the smoldering Alfa (an enigmatic Noah Saavedra). The film dwells in the vortex of the underground. Its counterpoint is the turmoil of Luisa’s inner struggles. At what price revolution, and how much are you willing to pay? There is no easy answer. Director von Heinz belonged to antifa herself when she was younger, so her personal experience adds to the film’s realism.