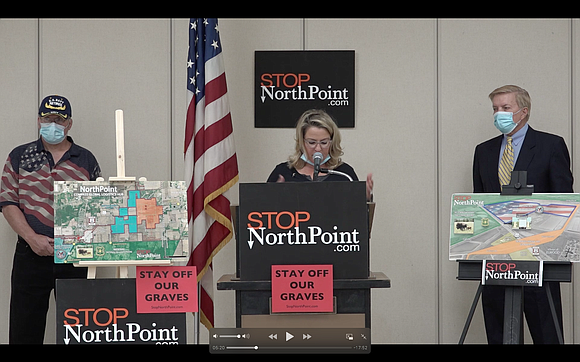 Erin Gallagher, spokeswoman for Stop NorthPoint LLC, speaks at a press conference held Thursday in Joliet after the group filed a five-count lawsuit against NorthPoint Development and the City of Joliet asking the court to stop progress of the industrial warehouse project.

A grassroots organization, along with some veterans and area residents filed a lawsuit Wednesday against the City of Joliet and NorthPoint Development in an effort to stop plans for a major warehouse/industrial park project.

Stop NorthPoint, LLC, in its filing, asks the court to permanently halt Joliet and NorthPoint from developing the the project, because, according to the group’s spokeswoman Erin Gallagher, the project would “force the financial burden onto the Joliet residents and neighboring communities; irreparably harm Abraham Lincoln National Cemetery; jeopardize the safety of school children commuting to school; and would destroy property and quality of life for residents living around the project.”

Gallagher, other supporters of Stop NorthPoint LLC, along with attorney Bob Fioretti held a press conference Thursday to discuss the lawsuit. While Joliet City Council member Larry Hug said he and other council members were e-mailed copies of the lawsuit, the city had not yet been officially served via the Will County Circuit Court.

The complaint alleges that NorthPoint failed to comply with multiple terms of the pre-annexation Agreement because it failed to provide proof of ownership of the majority of the property, lacks required contiguity, and does not have the necessary approvals for the bridge over Walter Strawn Drive (which is currently in litigation with the Village of Elwood).

The complaint also alleges that NorthPoint failed to submit all the required petitions for annexation.Stop NorthPoint’s complaint also alleges Joliet conducted constitutionally deficient and illegal hearings. Mayor Bob O’Dekirk and Joliet Attorney Marty Shannahan, according to Gallagher violated due process by not following the procedures the city published before the hearing. Councilwoman Jan Quillman hollered at callers after they hung up and could not respond to Quillman.

Bob Fioretti, attorney for the group, said the five-count complaint is about the “safety, health and welfare of the citizens of Joliet, the surrounding municipalities and the people of Will,” and added that the development will result in air pollution, noise pollution, more truck traffic and the decrease of property values in the surrounding region.

Joliet Mayor Bob O’Dekirk said he did see a copy of the lawsuit, but added that he was not aware whether the city had been officially served on Thursday.

“I read it and out attorneys read it and I’m having a difficult time understanding the cause of action. There’s a lot of noise being made, but there’s nothing I’ve seen that the city should be concerned about,” O’Dekirk said.

“I’m in no way intimidated by this lawsuit and I don’t think we did anything wrong. There’s nothing that I see that alarms me in anyway. This was nothing more than a media event - just another stunt.”

A Will County Circuit Court Judge recently approved a Temporary Restraining Order on behalf of the Village of Elwood, in effect temporarily putting the brakes on Joliet's plans for NorthPoint, also known as East Gate - Logistics Park Chicago.

The judge's decision to grant Elwood the preliminary injunction temporarily prevents the Joliet from annexing and zoning any of the property for the NorthPoint development.

That decision prompted the city council to delay voting on the final annexation agreement for NorthPoint. However, O'Dekirk said it will likely just mean notices will have to be sent out again for another hearing of the city's Plan Commission. It will not change anything, he said.

Hug, who is chairman of the city council's economic development committee, the only thing slowing anything down at this point is resolution of these lawsuits.

"Once the court resolve this lawsuits, it will be full steam ahead again," Hug said.

The proposed NorthPoint development, according to Joliet city officials, will bring increased tax revenues, construction jobs and other employment into the Joliet region.

NorthPoint Development’s plans call for Joliet to annex 1,260 acres a half-mile south of Breen Road and east of Chicago Road to develop a business park. NorthPoint is continue to acquire the land needed for the development and at this point has purchased more than 50 percent of that property.

In late April, the Joliet City Council took the first step toward bringing the controversial business park proposal to fruition, despite community groups vehemently opposing it. Hundreds of people spoke out against the development at call-in public hearings at the height of the Coronavirus pandemic.

Following a public hearing that lasted four days and included comments or e-mails from nearly 300 residents - many opposed to the development - the City Council voted 6-3 in favor of the pre-annexation agreement.