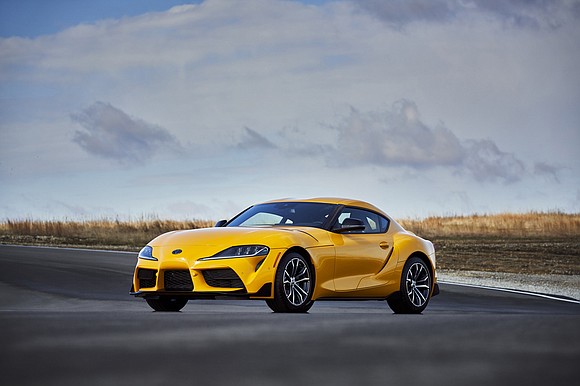 Let’s get right to it. For the 2021 model year, Toyota has expanded it Supra sports car line. It is a gambit in a crossover world, but the manufacturer obviously thinks it has the goods that will attract enough sports car lovers to make this venture successful.

New to the Supra lineup, which was just reintroduced to the market a year ago, is the GR Supra 2.0. There is a GR Supra 3.0, which has more oomph under the hood but we’re not here to talk about that car. Besides, we have not driven it.

But we have sat in the driver’s seat of the 2021 GR Toyota Supra 2.0. First, the GR stands for GAZOO Racing. According to our search, GAZOO refers to the word “Garage,” a very intimate place where people work together to improve the smallest details, with the aim of delivering ever-better cars and services for each customer, in each garage. Racing is self-explanatory.

Our test vehicle was a prototype, meaning it was not for sale. This close to launch, it was probably a prototype 1, which means this is what’s going to be sold to consumers. All major changes and most of the smaller adjustments as well have been made.

This Supra was powered by an inline four-cylinder engine, a first for the Supra, and it had a dual-scroll single turbocharger. This engine generated 255 horsepower and 295 pound-feet of torque at an awfully low 1,550 rpms. The engine was matched to an eight- speed automatic transmission. What’s more it tipped the scales at 3,180 lbs. That is light for a car.

The 2021 Supra 2.0’s torque, horsepower and light weight translated into a machine that was very, very quick. The two-seater was so fast there was not enough room to let it loose in the city. It could get from a standstill to 60 mph in five seconds flat. And it had an electronically limited top speed of 155 mph.

The hallmark of this Supra is a long hood and short rear end. The car is a hatchback, with a lip spoiler on the end of the trunk. The 2.0 is 200 pounds lighter than the 3.0 while maintaining 50-50 weight distribution.

One of the ways they did it was by embarking on a weight reduction scheme throughout the car. The Supra 2.0 had smaller front brake rotors than the Supra 3.0 (330mm x 24mm vs. 348mm x 36mm), and with single-piston calipers vs. four-piston calipers

The Supra 2.0 did not have the Active Differential and Adaptive Suspension used on the 3.0 model. A four-speaker audio system was standard, vs. the Supra 3.0’s 10-speaker system. Although we had a premium sound system.

And the Toyota Supra 2.0 seats were manually adjustable, vs. 14-way power-adjustable in the 3.0.