The through line from Resurrection to Dr. King and George Floyd 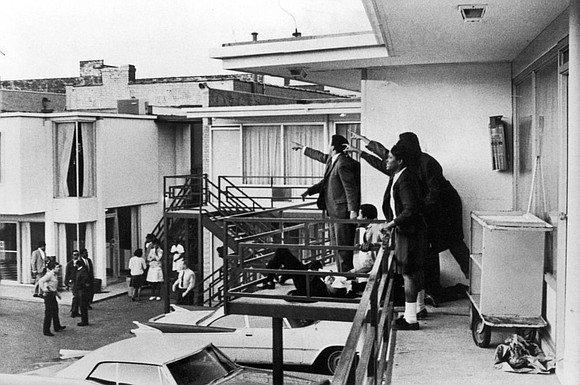 Photo by Joseph Louw from the LIFE Imges collection/Getty Images

“I don’t know what will happen now. We’ve got some difficult days ahead.” Those cautionary words preceded the now famous lines of Dr. Martin Luther King Jr.’s historic “Mountaintop” speech that he delivered in Memphis, Tennessee on April 3, 1968 on the eve of his assassination on the balcony of the Lorraine Motel.

Looking back upon this monumental event, and reflecting on Resurrection Sunday, it’s difficult to overlook the coincidental relationship between those events and the current trial regarding the murder of George Floyd.

If Floyd’s death was not a crucifixion, then I don’t know what is. The fate of the accused officer hangs in the balance in Minneapolis, while the rest of the nation stands breathlessly at the precipice. And, here we are again.

On the evening of Dr. King’s assassination, I was on my way to my night history class at Roosevelt University, where I was in my final year. A girl rushed onto the elevator crying. “He’s been shot. He’s been killed!” “Who, I asked. I never got an answer. She just kept sobbing uncontrollably.

When I got off the elevator at the student lounge, a white girl who was the head of our student body yelled at me, “Dr. King has been murdered!”

The situation quickly devolved into chaos, with students and teachers running every which way. I fled the building as if leaving a house on fire, never to return.

The next few days were all a blur. I was living on the top floor of the Avon building in Woodlawn, which long since has been demolished. It was the highest vantage point in the neighborhood, being five stories tall. (The closest tall building at the time was Rockefeller Chapel, a dozen blocks away). The surrounding blocks near the Avon had all been leveled due to Urban Renewal. I could see fires breaking out in areas all around the neighboring communities. The sounds of fire alarms, police sirens and breaking glass from rioting and looting filled the air for what seemed days on end.

I spent the majority of my time in bed; numbed of all emotion, accept despair.

Now, as the great Yogi Berra once said “It’s Déjà vu, all over again.”

I’m not holding out too much hope on the outcome of the George Floyd proceedings. A hung jury and another long-protracted round of mind-numbing courtroom proceedings looms as the most likely outcome. There could also be a technicality that would warrant a mistrial. Let’s hope I’m wrong!

As has happened so many times in recent decades, America has once again been brought to a moment of truth. There remains a choice between standing for justice, or once again lamenting the road not taken.

History seems to be repeating itself. The decades of the past century are punctuated by acts of racial violence; the bombing of a Birmingham church, the beating of Rodney King, the shooting of Trayvon Martin, the massacre at Mother Emanuel and now George Floyd. The list is endless.

There comes a point when an old wound is reopened so many times, it just doesn’t even hurt anymore. The pain becomes a constant that you simply learn to live with. That is indeed unfortunate, but no less a reality.

Yet. Here we are, once again at that proverbial ‘one moment in time,’ as the song intimates.

We've had many opportunities as a nation to turn the corner, but have always demurred. Every time, we turn our backs, just as we’re about to take that one fateful step across the Rubicon.

I re-paraphrase, “those who do not learn from the lesson of history are destined to repeat it.’ We ignore the obvious, only to once again be confronted with a reckoning.

There is hope on the horizon, but do we choose to see it? Dr. King laid it out so clearly in his view from the mountaintop. Yet, we meet him there every year at this same time, (now 53 years!) only to turn our backs on him once again.

There is the hope that society can finally move beyond all this bitterness and hatred. There is a chance to no longer look at a black man with fear or at a black woman with anger. But will society collectively take it?!

The past is inviolate. Its injustices and transgressions are written in stone. We can only change what happens in the future. Will it be another fateful bullet or knee to the neck, or the open hand of salvation and truth?