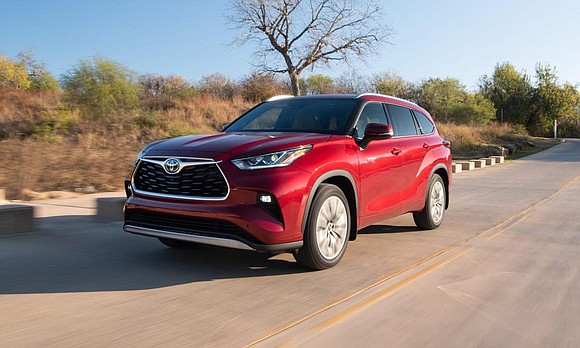 We test drove the 2021 Toyota Highlander Hybrid and found it improved.

The midsize crossover had a 2.5-liter four-cylinder engine teamed with two electric motors. The gasoline engine used variable valve timing on both the intake camshaft and the exhaust camshaft.

Toyota said a variable cooling system and a fully variable oil pump helped to enhance engine efficiency. The system made 243 horsepower; we had the AWD version, though there is a front-wheel-drive version as well.

All that improvement translated into the 2021 Toyota Highlander Hybrid having a fuel efficiency rating of 35 mpg in the city, 34 mpg on the highway and 35 mpg combined.

The transaxle mounted the electric motors (MG1 and MG2) coaxially rather than in-line, and the resulting smaller and lighter package reduced frictional losses. The gasoline engine and MG2 worked in concert to deliver dynamic performance, while both MG1 and MG2 charged the hybrid battery.

To reduce the transaxle’s size and weight, the reduction gear was a parallel shaft gear rather than a planetary gear, and a multi-function gear integrated the power-split planetary ring gear, parking gear, and counter-drive gear. Computer integration and a smaller, lighter power stack installed directly above the transaxle helped reduce energy transmission losses.

The battery pack was small enough to be installed under the rear seats so that it did not take up any cargo or passenger space. This means Highlander Hybrid drivers get all the benefits of a hybrid powertrain without sacrificing much-needed cargo room for everyday activities.

Almost, we found there was little headroom in the third row of our test vehicle. Most of what we just wrote came straight from Toyota’s press material and it really sounded good and it was true. But the creature comforts and the improvements for everyday driving were the real story. Toyota has transformed the Highlander Hybrid into a premium crossover.

The Highlander Hybrid went old school, but it didn’t look that way. The interior of our test vehicle was leather. There were heated and cooled seats. It had a moonroof. And there was a shelf that was beneath the dash that it spanned.

We noticed that the instruments were analogue with the power gauge on the left, the speedometer on the right and a TFT screen in the middle. We were also pleased that the audio system could be tuned with a volume knob and another knob to change stations.

It seemed clear to us that the designers of the 2021 Toyota Highlander Hybrid had the drivers and passengers in mind. There were not a lot of controls that you had to pull out the owner’s manual to figure out how to work.

They also got rid of the software that sent certain settings back to default, in other words turn off when the vehicle was turned off. If you had the heated seats on, when we restarted the car they were still on, so was the heated steering wheel.

There were three ride modes: sport, normal and eco. The Highlander could also be put in full electric vehicle mode for short distances and it could also be set in trail mode.

The infotainment touch screen could display audio information, navigation details and climate controls. Yes, it could split into three channels of information.

There were three USB drives under the shelf as well as a 12V plug. The wireless charger was in the center console which was really deep. The second-row area had its own climate controls and there were manual privacy screens on the side widows. Two more USB jacks and a 120V plug with ground were also accessed from the second row.

There were two things we were not pleased with. They need to do a better job in quieting the electronic continuous variable transmission. The Highlander was quick enough but the noise the ECVT made under hard acceleration made it sound like the vehicle was going nowhere.

And the third-row seat had absolutely no head room for an adult. It was a space for somebody shorter and younger. However, it was relatively easy getting into the third row. The power lift gate and the 360-degree overview camera were appreciated backing out of our driveway and for loading cargo.