The Saint of the Impossible a raw, tragic/comic look at illegal immigrant life 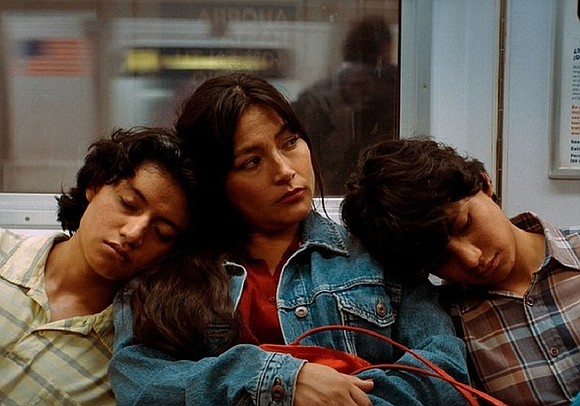 Paul and Tito Andino (l. and r. real brothers Adriano and Marcelo Duran Castro) and their mother, Raffaella (Negaly Soller (c)) take the lonley ride from Manhattan to their grungy apartment in the Bronx

Raffaella Andino (played with solemn dignity by Peruvian actress Magaly Solier, known for Claudia Llosa’s The Milk of Sorrow) is an illegal Peruvian immigrant who brings her two teen-aged sons, fraternal twins Paul and Tito (played by real-life brothers Adriano and Marcelo Durand Castro), along with their raging adolescent hormones, to New York to chart a new path and a new way of life. They find neither.

Working odd gigs; waitressing all hours at a local all-night Greek diner and, on her days off, at a Bronx Chicken shack, Raffaela fights to maintain food on the table at home and her dignity otherwise, in the face of the condescending and racist attitudes of her diner manager, (a racist-on-steroids Joseph Covino), and just about everyone else she meets.

Paul and Tito zig zag precariously through West Midtown traffic on their bikes, delivering take-out from a local Szechuan house run by a taciturn, unrelentingly oppressive owner, Mr. Liu (Vincent Chan-Mysteries at the Museum-2010, Grave Mysteries-2017-Homicide for the Holidays-2016).

If you’ve spent any time in New York City, you know that Peruvians are part of the Mise en Scene. They are all-pervasive, and an integral part of the constant din that is the background noise to the city.

The cacophony of New York, in all its infamous glory, is captured in exquisite detail by Sound Designer Gina Keller and her sound department team of co-designer Peter Staubli, with Heather Monetti and Yuri Pridachin. The seamless film editing of Jann Anderegg is also noteworthy.

Peru is further represented in the film by a lady collecting money for Animal Rights, who shepherds a trained Llama, ‘Frank’ in real life, and in the film. Frank may spit in your face, unprompted, at any given moment. No extra charge! That particularly unique skill is a punctuation point later in the film.

“What animal do you want to be,” Paul asks Kristin , the mysterious Croatian girl in their American English class, as she and the boys have an interlude by the sea. “A squid or a Llama,” she answers. “Something that spits!”

"You look like an angry Lllama....about to spit!" Paul retorts.

Based on a novel by multi-award winning Dutch writer Arnon Grunberg, the story is told through the eyes of Paul and Tito as they write emotionally revealing entries in their workbook from the English language school their mother enrolled them in at New York’s Teaching Center. The class is a prerequisite for immigrants desiring to achieve US citizenship.

“We live in a city of invisibles,” Paul writes in the margins of his notebook. “We have been invisible for two years, two months and two days.”

Their despair is unending as they begin feeling increasingly dehumanized by the invisibility of their existence. “Nobody see us,” he says, as the two boys light candles and pray at a shrine to Santa Rita, the Saint of the Impossible. They pray that they’ll meet a beautiful girl who will fall in love with them and end their pain.

Theirs is a hardscrabble existence living, literally, from hand to mouth. The roof over their head is a tiny apartment, given to Rafaella by a 'friend' at the restaurant (presumably by one of customer/'visitors'). The rest is garnered by hook or crook,

Early in the film, we meet her guardian angel and confidant, fellow waitress and Peruvian immigrant, Lucha (a pithy and sympathetic Elizabeth Covarrubias- Wedding for Christmas-2018).

Enter Kristin Filipovic (a lithesome, mysterious Tara Thaller) a Croatian immigrant, recently arrived from Zagreb, who shows up late to one of the boy’s English language classes. Paul and Tito nod in mutual agreement, their prayer has finally been answered.

After class, the boys are invited by Kristin to take, what is to them, a magical walk through Washington Square Park. Director Wilkin takes us on an artfully cinematic romp through the park’s giant fountain with Kristin and the boys recreating the famous ‘ Trevi Fountain’ scene from La Dolce Vita. It is a delightful moment, yet it is a dark harbinger of things to come.

Kristin also gives the brothers a copy of her model 'head shots,' which become a source of nightly self-pleasuring for them.

“We call her by her first name, Rafaella, “ Paul intones in the film’s opening narration, referring to their mother, “because she has us very young. She is so beautiful. If she weren’t our mom, we’d fall in love with her.”

Rafaella uses her looks to good advantage. Besides hustling tips, she entices her male customers to after-hours pay-to-stay ‘visits’ in their grungy apartment, which forces the boys to bunk on a cot in the closet. (Why do you have so many visitors? The 'older' and more forward Paul asks, as mother and sons share their nightly bed. “Because,’ mom answers, “Without them, you would have nothing. No school, no apartment, no sunglasses, Nothing!” putting a fine point on it by reducing their complex situation to its lowest, easily grasped, common denominator.

There’s more to Kristin than meets the eye, including a sinister undercurrent of danger. (While the boys are being enthralled by her charms in Washington Square Park, she entertains them by demonstrating her prowess with a switchblade. “First you use the pepper spray, which blinds them. Then you do this,” she makes several angular thrusts through the air with her knife. That skill comes into play in a lover’s revenge, later in the film).

There’s also a lot more to Paul and Tito. They are keenly aware of their reduced status as illegal immigrants. “We are invisible” is a phrase and a theme that is repeated often.

“I want that people see me,” Paul declares to Kristin in a lucid moment when they are getting to know each other. “People, they look at me, but they don’t see me.”

Unknown to the boys, Kristin and their mom have a lot in common. Like Raffaella, Kristin too hustles her body in the guise of “dinner companionship” to wealthy, lonely men. She uses the riches she gains to send currency exchange money transfers to lawyers who are defending her jailed boyfriend, who later betrays her.

Raffella’s sexual exploits finally pay off in the person of Ewald (a smarmy Simon Kaser), a low-budget Casanova with a wallet full of counterfeit credit cards who is also the author of a violently unread pulp fiction novel. He offends the boys by constantly proclaiming, “I’m in love with the most beautiful woman-with-children.”

“Her name is Raffella,” the boys insist. “Stop calling her ‘woman-with-children!” They are pissed at Ewald. Their rift only widens with time.

Director Wilkin gives a visceral portrait of the hardscrabble life of the illegal immigrant. We experience the ominous, ever-presence of ICE agents (in the person of a persistent Qurrat Ann Kadwani as ICE officer Statham).

“We crossed the border in a meat truck!’ Paul shouts at a clueless Ewald as she passes out from the sight of maggot infested chicken stored in the bathtub of their apartment intended for an illegal burrito takeout venture.

The Saint of the Impossible is a gem of a movie with excellent camera work by A. Burak Turan and a hauntingly atmospheric score by Brent Arnold and Balz Bachmann. The production design by Michael Baumgartner aids director Wilkin in creating a visual tone poem that transforms the sharply contrasting visual climes of depravity and ecstasy into breathtaking images.

All of the locations are real places, frequented by everyday New Yorkers, which adds to the authentic feel. Wilkin’s style reminds me of some of Woody Allen’s best work, pre sex scandal. It reflects a reverence for the romance of the city. New York becomes a silent, brooding character which nonetheless speaks resoundingly.

The Saint of the Impossible is a Swiss/American production from Cineuropa, 90 minutes long in English, Spanish and German with occasional subtitles. Visit cineuropa.org for information on digital and on demand release.