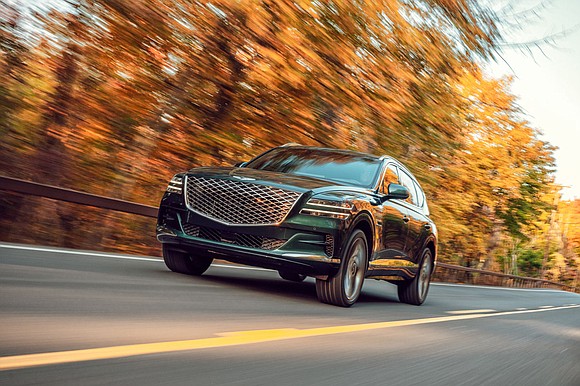 BLOOMFIELD HILLS, MI – We came to this affluent suburb north of Detroit for a quick rinse test drive of the 2021 Genesis GV80. This was a regional affair with similar events scheduled for L.A. and New York, thanks to COVID-19.

The point is Genesis is trying to adapt to the times. So, this is going to be a quick rinse review. Luxury manufacturers have always been known for their sedans and that is the way that Genesis started, introducing three well received sedans.

But this is a crossover market and critics and observers alike have been waiting for Genesis to introduce a utility vehicle and now they have, the 2021 GV80.

On streets chock full of crossovers and sport utilities of all stripes, the GV80 stood out. As we drove it to an Eastside suburb, heads turn which was significant since we were on expressways – I-75 and I-94.

It had a quad lamp design in the front and at the rear. The grille was a G-Matric pattern inspired by the sparkle of diamonds when illuminated by light. That’s what Genesis said. The point is that this crossover had the large wide-mouthed V that is the signature of Genesis.

We had the top of the line three-row Genesis GV80 3.5 AWD Advanced trim line. Powered by a twin turbo 3.5-liter V6 that made 375 horsepower and 391 pound-feet of torque at an awfully low 1,300 to 4,500 RPM. It was mated to an eight-speed automatic transmission that had paddle shifters. Our test model was rated at 18 mpg in the city, 23 mpg on the highway and 20 mpg combined.

There were all sorts of creature comforts. The GV80 could park itself, parallel or perpendicular. It could be locked or unlocked with your phone or with a keycard. It had a 21-speaker audio system with more than 1,000 watts.

The all-wheel drive system was rear wheel biased. In other words, it could send 100 percent of its power to the rear wheels. And, if needed, up to 50 percent of torque to the front wheels.

Two things stood out during our long but brief test drive. There was road construction everywhere. Yet, little of the noise pierced the passenger cabin. The 2021 GV80 had a noise cancellation system that focused on the wheel wells, since that’s where most road noise that gets into the passenger cabin comes from.

The relative silence was impressive since we’re talking about ripped up roads, narrow lanes, quick angles, and that meant a lot more than orange barrels. Power was also quiet, subtle, and plentiful when needed.

In the head up display there was a blind side alert. We found this much easier to see, it was right in front of us rather than looking at the side view mirror out of the corner of our eye. Several times we were alerted to a vehicle on our hind quarter but when we glanced over, we couldn’t see anything, but a vehicle was there. That to us was a significant safety feature.

The interior was spacious. Genesis was after a horizontal layout with plenty of space. They wanted the beauty of white space, a feeling of openness, and a calming atmosphere. They achieved it. Even on the cluttered, orange barrel filled expressway here, there was an air of serenity in the Genesis GV80.

And one last thing, for this quick rinse review, the 2021 Genesis GV80 could park itself. Either perpendicularly or parallel, it could park itself with the driver inside or outside of the vehicle. It worked for forward and reverse parking as well.

There was so much and so little time. We never got the change to check out the climate controls that can be swiped to increase fan speed. The controller was concaved. It was the second time we’ve seen it, but we still have no clue on how it really works. The GV80 has a shift by wire transmission; given traffic conditions we did not pay that much attention.