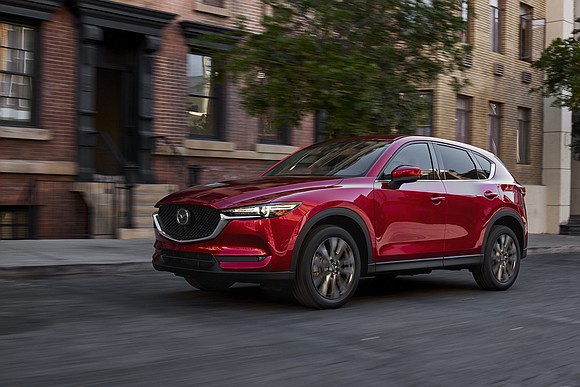 We got a chance to try out the Mazda CX-5 with the relatively new 2.5-liter turbocharged four-cylinder engine. It made a respectable 227 horsepower and 310 pound-feet of torque.

This engine was mated to a six-speed automatic transmission with a sport mode. The combination got 22 mpg in the city, 27 mpg on the highway and 24 mpg combined.

The extra oomph, without a blower this engine makes about 187 horsepower, was a nice addition. It wasn’t brutally quicker, but it was a nice manageable enhancement.

Acceleration was appreciable. The CX-5 handled nicely, and the suspension was good. Although it was bigger than the CX3, the crossover was still small and maneuverable.

The CX-5’s interior was clean and comfortable. However, we have been test-driving several vehicles with digital instrument panels. In other words, the analogue setup in the CX-5 did seem a little cluttered. But the head-up display kept our attention where it should have been; out in front of us.

It had a 10.5-inch floating infotainment screen atop that dash that was not touch. Beneath that in the face of the dash were vents and beneath them were the climate controls. That was it. Everything else was controlled on the screen or by the mouse, which was at the base of the center console where there were two USB jacks and a 12V plug.

There were two more USB jacks in the armrest for the rear seats. They were heated too. We thought there was plenty of headroom, but it would be a close fit for three people to sit abreast in the backseats.

This CX-5 had a moonroof as well as a power liftgate. There were 19-inch alloy wheels, an overview camera, blindside alert, lane departure alert, paddle shifters, and automatic folding sideview mirrors that were heated.

We forgot to mention that the front seats were heated and cooled, and the steering wheel was heated. Our test vehicle also had all-wheel drive.

We have always thought the media system on the Mazda was a little involved in terms of changing stations or changing sources. But that was our only gripe. The 2021 Mazda CX-5 was excellent and with the turbo engine it had a little more oomph, which was not bad.