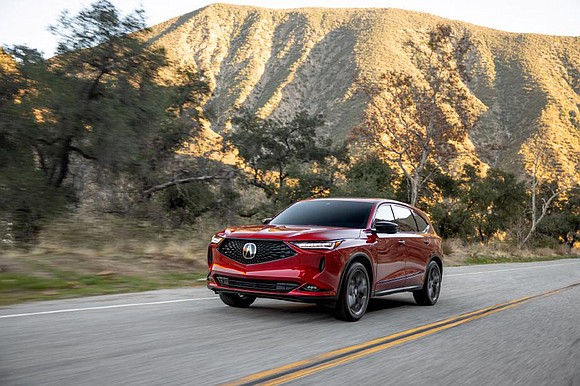 Acura has a new flagship, and we couldn’t hear it. We’ll explain.

The 2022 Acura MDX we had featured remote start. We tried it just before we went out to shovel the snow and didn’t think it worked because we couldn’t hear the three-row crossover start up. Our driveway is right next to the kitchen window, so we’ve done this many times from inside our heated house.

Anyway, we’re out there, looking around and noticed the exhaust condensing in the air. The MDX was running; it was so quiet that we couldn’t hear the engine even though we were standing right next to it. That is the first time that has ever happened with remote start on any vehicle we’ve tested.

Our test vehicle was powered by a 3.5-liter turbocharged V6 engine that made 290 horsepower and 267 pound-feet of torque. It was mated to a 10-speed automatic transmission with paddle shifters.

This engine was quiet, even when powering down the pavement, during early morning starts and even when the outside elements had the temperature down in the teens.

We had the 2022 Acura MDX for two days but that was enough to say that it is upping the ante in the premium segment of the crossover market.

The fourth generation MDX had a new face; the grille and hood had been changed. The stance was wider by 1.4 inches and the wheelbase was 2.8 inches longer. What’s more, the dash to axle ratio had been extended by 4 inches.

The MDX seemed much bigger, and our three-rowed version was low to ground and it had the silhouette of a minivan, except it was lower and not as long.

One of things we noticed returning from the gym early in the morning was the beam width of the LED headlights with embedded DRLs, it extended to both sides of the Lodge Freeway.

Whether we were on an expressway or surface streets, the 2022 MDX rode smooth which is an accomplishment. It had snowed and the streets were filled with slush and ice. But there was not a slip or dip in its ride.

The MDX sat on an all-new light truck platform with a double wishbone front suspension and multilink rear suspension. The vehicle was highly maneuverable, solid on the road, and steady under hard acceleration.

The new belt-driven electric power steering was light to the touch because of the high-output electric motor. It was also quicker. Acura said it gave the new MDX increased agility and we can’t argue with that.

We didn’t get too much of a chance to really examine the interior, but we can tell you this, there was an extensive all digital instrument screen that could be customized.

They said the third row was easier to access, we didn’t get the chance to try it. But the panoramic moonroof was expansive and of course let in plenty of light. We had heated and cooled front memory seats.

Behind the third-row cargo space was increased to 16.3 cu.-ft. and could expand to 71.4 cu.-ft. (+3.0) with both second and third row seats folded. The new MDX also featured expanded under-floor storage behind the third row.

We had a premium audio system, Apple CarPlay, and Android Auto. There was Qi-compatible wireless charging and USB-C charging, Amazon Alexa built in was standard and a low-speed braking system.

Of course, we had satellite radio, voice controls, Bluetooth, streaming and other creature comforts. We need to ask for the 2022 MDX for a more extensive drive test. But for now, we can tell you that base prices start at $46,900 for the front wheel drive model and climb to $60,650 for the lone all-wheel-drive top of the line model.