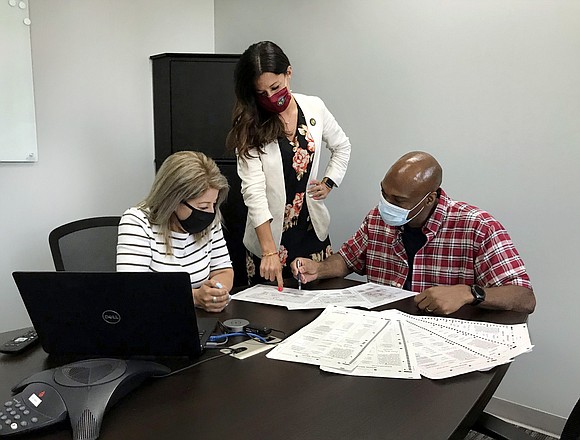 While Senate Democrats edged closer to an agreement this week on new voting rights legislation, 18 states have enacted 30 laws to make it harder for Americans to vote, according to the Brennan Center for Justice.

According to a “Voting Rights Roundup” article published in July on the Brennan Center for Justice’s website, these laws “make mail voting and early voting more difficult, impose harsher voter ID requirements, and make faulty voter purges more likely, among other things. More than 400 bills with provisions that restrict voting access have been introduced in 49 states in the 2021 legislative sessions.”

Most, if not all of these, were prompted by former President Donald Trump’s proven baseless claims of fraud in the 2020 Presidential Election. Every legal challenge to vote counts from Trump’s legal team after the November 2020 Election that resulted in Joe Biden winning the race and becoming the nation’s next President, were found to be without merit. Trump, however, has never conceded the election and continues to claim the election was stolen from him. What’s even more concerning to election experts on both sides of the political aisle is the claims are fueling these bills aimed at restricting voting access by Republican state legislators throughout the country.

Here’s an excerpt from a report on filibuster reform published September 13 on the Brookings Institute’s website. “Across the nation, state officials are acting with brazen impunity in curtailing voting rights. At best nakedly partisan, and at worst openly racist, legislators are proposing and passing, and some governors are signing, statutes that will strip the ballot from millions, seize the power to overturn election outcomes those partisans don’t like, and potentially tilt the political playing field for decades to come.”

'The approval of this automation funding shows the commitment of Will County’s leadership team and the entire Will County Board to the accurate, efficient, and secure tabulation of Vote By Mail Ballots.'

Still, here at home in Illinois, legislators appear to be heading in the direction of more access to the voting booth. That’s certainly true for Will County.

The Will County Board at its August meeting unanimously approved $1.9 million in funding to purchase equipment to automate Will County Clerk Lauren Staley Ferry’s office’s growing Vote By Mail program.

The COVID-19 Pandemic and the passage of new voting legislation has driven up participation in Vote By Mail to unprecedented levels in Will County and across Illinois. In the 2020 Presidential Election, the Will County Clerk’s Office fulfilled 123,779 requests for Vote By Mail Ballots, a 310-percent spike over the previous record of 30,192 requests in the 2016 Presidential Election.

“The approval of this automation funding shows the commitment of Will County’s leadership team and the entire Will County Board to the accurate, efficient, and secure tabulation of Vote By Mail Ballots,” County Clerk Staley Ferry said. “County Board Speaker Mimi Cowan, Minority Leader Mike Fricilone, Majority Leader Meta Mueller, and County Executive Jennifer Bertino-Tarrant all recognize the importance of upgrading our program as participation in Vote By Mail continues to rise. It is gratifying to partner with this team to ensure precision and accuracy in processing ballots for our voters and to guarantee a solid return on our investment for every Will County taxpayer.”

Will County Board Speaker Mimi Cowan noted that cooperation between Will County’s elected officials on important projects serves the public’s interests. “The County Board supports the County Clerk’s goal of efficient and effective management of elections,” Speaker Cowan said. “We appreciate the collaboration between our elected officials in our work to provide services to the public, and we encourage voters to take advantage of the Vote By Mail option in future elections. This is a win-win move.”

County Board Minority Leader Mike Fricilone, a Republican, said: “When the Board makes funding decisions, we always look at the return on our investments. The savings we will see in reduced costs of the Clerk’s operations will exceed the amount of dollars the Board is allocating to make this automation happen. This just makes sense to do, and we are happy to work together to get this going.”

Approval of this funding enables County Clerk Staley Ferry to formalize an agreement with BlueCrest, a global leader in enterprise print, mail, and customer communications, to purchase state-of-the-art equipment to automate her Vote By Mail program. Formerly a division of Pitney Bowes’ Document Messaging Technologies, BlueCrest provides a comprehensive line of printers, inserters, and sorters for an integrated, secure, start-to-finish Vote By Mail program for processing both outbound and inbound ballots.

The BlueCrest suite of equipment will, according to the clerk, dramatically increase the speed and accuracy of assembling Vote By Mail packets and processing ballot returns and save Staley Ferry’s office more than $234,000 per election on part-time workers and staff overtime alone. This will save the county money but residents who look forward to working the elections for extra money, including seniors will no longer receive the added income. Streamlining the size of Vote By Mail packets and presorting them before mailing will save an estimated $183,000 in postage per election based on 125,000 ballots. Other savings of at least $100,000 per election are anticipated.

The $1.9 million approved by the Will County Board includes funding to renovate workspace in the Will County Office Building to serve as a Vote By Mail center as well as a five-year maintenance contract and related equipment and supplies.

The County Clerk noted that automating the Vote By Mail program would follow through on her commitment to modernize the County Clerk’s Office and guarantee secure and efficient elections.

Staley-Ferry’s Vote By Mail Department, and a team of roughly 30 Election Judges assembled and processed the 123,779 packets that were sent to voters and the 109,997 ballots that were returned in the 2020 Presidential Election.

With funding approved, the County Clerk expects to activate the BlueCrest system for the June 28 Primary Election.