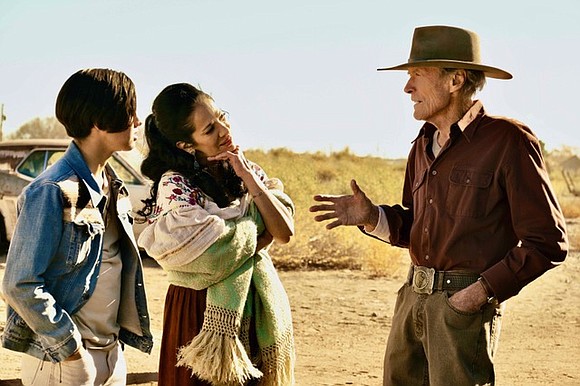 When exposition and backstory weigh down an opening scene it’s tough for a film to get off the ground. That’s the burden screenwriter Nick Schenk (Gran Torino) and novelist N. Richard Nash’s dated, over-written script gives this road trip movie. Dead weight.

In 1979, Mike Milo (Clint Eastwood), an older, washed-up ex-rodeo cowboy, is sent to Mexico to retrieve a 13-year-old biracial rebellious Mexican kid Rafa (Eduardo Minett). He’s tasked with delivering the tween to his dad (Dwight Yoakam) in the States. Opportunities for cross-cultural humor and consciousness raising are apparent, but never utilized in a way that is refreshing or profound. Astute audiences may anticipate the kid helping the senior citizen regain his youth and usefulness, and the surrogate elder patriarch bringing stability to the juvenile’s unstable life. That happens, but in the most blatant and deliberate ways. It’s way too obvious.

Any introspective thoughts that should be seen and not heard are blurted out in an overabundance of dialogue (e.g., a verbal altercation between Rafa and Mike as they stand around a car long after the point of the dispute has been made). Nothing seems natural. Nothing realistic. Lots of moviemaking contrivances.

Hollywoodish production elements that feign but do not replicate real life may distance potential viewers from the heart of the story. Too many interiors look fake (production designer Ron Reiss, Richard Jewell) even if they aren’t. The lighting (cinematographer Ben Davis, Three Billboards Outside Ebbing, Missouri) is so garish it emphasizes production design flaws. The characters’ clothes (costume designer Deborah Hopper) are so clean and well pressed you question whether they’ve ever been touched by real Southwestern dust. The musical score (Mark Mancina, Moana) fairs better and the few Mexican songs that are on the soundtrack are more evocative than any other element in the 1hr and 44min production, which is edited (David S. Cox, Den of Thieves) with certain conviction, but little artistry. A 90-minute length would have served everyone better.

As a director, Eastwood is known for his slow hand and unfettered approach. It’s one that often suits the characters he plays and stories he tells. In this case, slow pacing—bordering on slow motion—and a desire not to complicate things works against the narrative. Add in too many preposterous moments, car chases that barely crack 30mph and poorly choreographed fist fights and at some point, you wish Eastwood was working with better equipment, in general.

Yoakam gallantly suffers through his wordy dialogue. Fernanda Urrejola (Netflix’s Narcos: Mexico), as Leta, the callous mother of the motherless child, is never convincing. Partly because she says things few women would say. E.g., she dares Mike: “Take him if you can find him. He is a monster!” That will lead audiences to believe that the troubled youth is a demonic terror—a young Mexican Freddy Krueger. Then when Eduardo Minett shows up, in his screen debut as Rafa, he never displays the jaded brokenness required of his character. Minett is entirely too wholesome to portray a hardened street kid who is pimping his rooster Macho out for cockfights. It feels more like he’s a member of the Mickey Mouse Club moonlighting.

Eastwood, as a 91-year-old actor, still has that roughhewn charisma that has made him iconic. On screen, he looks thin and fragile, like father time is shadowing him. Pity the Mike part seems like it was written for a 60- or 70-year-old. Instead of making the nonagenarian act like a sexagenarian why not rewrite the part so that the 90ish-year-old Mike must solve problems like someone his own age. In one crucial scene, Mike pummels a thug with one big punch. It’s improbable. Skip the younger senior citizen physicality—it doesn’t work. But, if he’d picked up a gun and shot the assailant, audiences wouldn’t question his actions. They’d cheer.

The moment when Eastwood truly evokes the old Clint, is when Mike flirts with the much younger café owner Marta, played very effectively by Natalia Traven (Collateral Damage). Traven makes this pivotal woman more engrossing, beguiling and self-assured than any other character in the film. Her time on screen is short. Short but precious. She should be the lead in a film or TV series. She has that kind of gravitas.

Some will say this is a role Eastwood should have taken four decades ago (the script was originally written in 1980). Others will say he should have directed it two decades ago. There would be far less criticism if the flaccid, unimaginative screenplay was more realistic, less chatty and had fewer improbable machinations.

Some may wish the veteran filmmaker Clint Eastwood had had the chance to paint this picture sparsely. With just a few strokes.