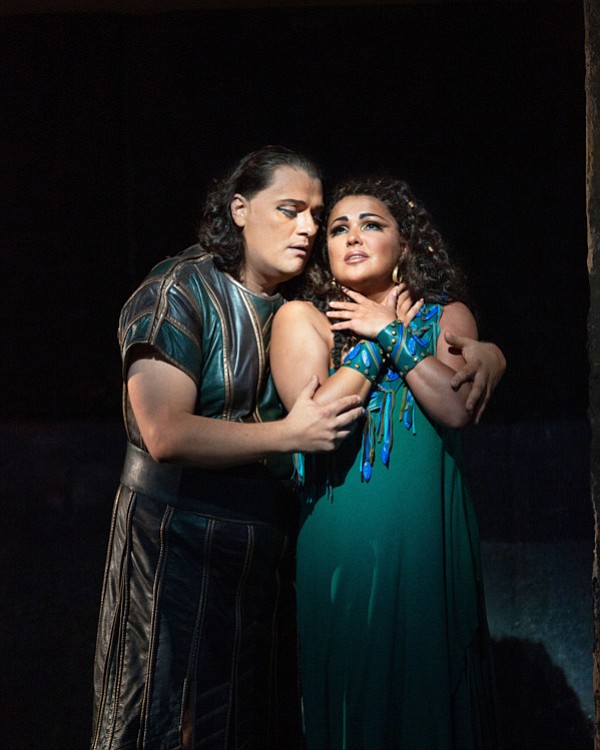 Met Opera's newest box office darling Anna Netrebko is stunning in her Met Opera debut as the long suffering Ethiopian princess Aida in the title role of Giuseppe Verdi's epic masterpiece now on the Metropolitan Opera stage through March 7 and in a MetLiveHD Encore presentation Weds Oct. 10 at 1pm and 6:30pm in selected movie theaters nationwide. Check your local listings or visit metopera.prg or fathom events.com for theatre locations and tickets. Mezzo soprano Anita Rachvelishvili is ravishingly cruel as her nemesis Amneris, who is both Aida's slave mistress and rival for the affections of Radames, sung with faltering discomfort by Met go-to veteran Aleksandrs Antonenko (Calaf in Turandot, Otello, Don Jose in Carmen, Pollione in Norma, Grigoy in Boris Godunov, you get the idea). Antonenko wasn't having his best night at the Met performance of Saturday, September 29, which is reviewed here. He was obviously suffering from a bad head cold which caused him to miss all of the high notes. Especially in the grueling Celeste Aida aria right at the beginning of Act I which portended the perils ahead. Antonenko hit the final crescendo with a croak that rattled right through your teeth, even in the upper reaches of Dress Circle. It didn't get any better as the night progressed. His cold must have affected his hearing as well, because Antonenko lagged far behind his fellow singers in the ensembles, like a runner with a torn hamstring in the New York Marathon.