To protect consumers from the growing problem of privatization and high-water bills, a new proposal in Springfield would require cities across Illinois to hold referendums before a private utility could buy their water/sewer system. The Citizens Utility Board (CUB) urged Illinoisans concerned about high water bills to visit *CUBActionCenter.com* to send a message to the General Assembly in support of House Bill 2392, ahead of a Subject Matter hearing held by the House Public Utilities Committee 3 p.m. Tuesday, March 19. The measure is sponsored by state Rep. John Connor of Crest Hill. “Five years ago, private water companies pushed a bill that let them increase rates on their own customers to buy more public water systems,” Rep. Connor said. “Last year, they extended that bill another 10 years. And who’s paying for them to buy these public water systems? You are, if you are on a private water system. I just think that in a democracy they should get permission from most of the people affected first.” HB 2392, which has bipartisan support, would require a referendum of local voters prior to a municipality being allowed to sell its water/sewer system to Illinois American Water or Aqua Illinois, the state’s two largest private water companies. Although about 80 percent of water systems in Illinois are public, Illinois American and Aqua in recent years have been buying more community systems, thanks in part to friendly state legislation.

Holiday obesity tip: Keeping the heat up will help keep off the pounds

Enjoy your food and put your feet up over the holiday, but don’t turn down the heating in your home. An important scientific study shows that people who live in well-heated homes are less likely to be obese and have lower Body Mass Index (BMI) levels than those who shiver through a northern hemisphere winter.

The Friends of Sunny Hill offer an opportunity for holiday shoppers to get a jump on their gift buying at its annual holiday bazaar, barbecue luncheon and bake sale on Friday, Nov. 3.

Cybershopping tips from an expert to keep you safe this season

The holidays can be such a hectic time and shopping online can be a great way to help you find and purchase gifts for your loved ones without wasting precious time driving around the mall parking lot.

The keys to outfitting your first apartment on a budget

Moving into a place of your own for the first time is a huge step. I remember my first post-college apartment move. It was nothing special, but it was mine. It came with a few new challenges and responsibilities [http://www.practicalmoneyskills.com/learn/life_events/renting_an_apartment] and all sorts of opportunities. For the first time, I was able to decide how to decorate an entire living area and turn a blank slate into a home. Here's some advice for finding what you'll need on a budget and a few inexpensive ideas to make otherwise unimaginative rooms come to life. Look for hand-me-down and used furniture. Furniture – tables, chairs, bookshelves etc. – often takes up the most space and can be the biggest drain on your budget. You could start by mapping out your home using online floor plan software and determining what might fit where. 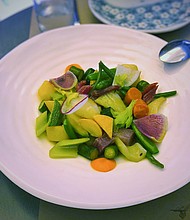 The Metropolitan Youth Symphony Orchestra will perform two concerts in March. The first performance is free and begins at 7:30 p.m. March 15 at the St. Charles Borromeo Convocation Hall on the Romeoville campus of Lewis University. The program will be repeated at 4 p.m. March 19 in the Fine Arts Auditorium at Joliet Junior College. Admission is $10 at the door for the JJC performance. Dr. Lawrence Sisk, professor of music at Lewis University, will conduct the orchestra in a program that includes Paul Dukas’s The Sorcerer’s Apprentice, Rimsky-Korsakov’s Procession of the Princes from Mlada, Ippolitov-Ivanov’s Procession of the Sardar from Caucasian Sketches, and selections from Grieg’s Peer Gynt. The orchestra will also perform JEST by Roydon Tse, the winner of the 2017 Student Composition Contest. MYSO received over 70 student submissions, with entries from all around the world--from Illinois and Canada to Italy and Norway. Tse is a rising composer of symphonic, chamber and vocal works, and his music has been performed internationally including in Australia, China, Portugal, Canada, and the U.S.

I was listening actually and ultimately arguing a point with a few people over the holiday weekend about mandatory black games due to low stadium attendance at the professional ranks. According to online site Wikipedia with regards to professional football "any broadcaster that has a signal that hits any area within a 75 miles (121 km) radius of an NFL stadium may only broadcast a game if that game is a road game (also known as an away game), or if the game sells out 72 hours or more before the start time for the game.

Six ways to save on your next car

Looking for an eco-friendly subcompact or the thrills that come with a sports car? Perhaps the practicality of a sedan or a spacious SUV better fits your needs? No matter what type of vehicle is calling your name, planning your purchase can help you save as much money as possible. Consider these six savings tips while shopping for your next car. Whether you're concerned about upfront, monthly or long-term costs, there's something here that can help you. 1. Look for a fuel-efficient car. Buying a hybrid or all-electric vehicle rather than a gas guzzler could help you save money on long-run fuel costs. Plus, state and federal tax credits might give you some additional upfront savings.

Romeoville has been awarded the Certificate of Achievement for Excellence in Financial Reporting by the Government Finance Officers Association of the United States and Canada for its comprehensive annual financial report for the fiscal year ended 2016.

Proposals from agencies owned by minorities, women and persons with disabilities are encouraged Camelot Illinois has issued a request for proposals (RFP) for agencies to deliver media planning and buying services. Camelot Illinois is a leading technology and services provider that supports the Illinois Lottery. As part of its overall business strategy, Camelot Illinois plans to promote the multiple ways both new and existing players can access and interact with lottery products, leading to increased sales online and at retail locations. Camelot’s goal is to create an innovative, modern lottery that will attract new players and sustainably grow financial returns to the State of Illinois. “Camelot Illinois is committed to growing the Illinois Lottery in a socially responsible way through compelling marketing and advertising campaigns designed to build brand awareness and trust,” said Camelot Illinois General Manager Colin Hadden. “We are looking to partner with a dynamic and innovative media agency who can help us achieve these important goals.”

Letter: Joliet Noon Lion’s Club is on the move

The Joliet Noon Lions Club is one of over 43,000 Lions Clubs worldwide. The Lions’ motto, “We Serve,” describes what we do. Lions International recently celebrated its 100th Birthday and the Joliet Noon Club was chartered as one of the early clubs in 1921. In 1954, Lions International established a contest for a motto and received responses from over 6,000 members worldwide. The motto requirements were that it be enduring, international in character, easily translatable, not wordy, descriptive of our work, and no longer than five words. Of all the suggestions, there were eleven suggestions for “We Serve” from Lion D. A. Stevenson of Fonthill, Ontario, Canada.

“A Tuba Christmas” by Helen L. Wilbur, illustrated by Mary Reaves Uhles c.2018, Sleeping Bear Press $16.99 / $21.99 Canada 32 pages “Construction Site on Christmas Night” by Sherri Duskey Rinker and Ag Ford c.2018, Chronicle Kids $16.99 / $22.99 Canada 40 pages “Plum: How the Sugar Plum Fairy Got Her Wings” by Sean Hayes & Scott Icenogle, illustrated by Robin Thompson c.2018, Simon & Schuster Books for Young Readers $17.99 / $23.99 Canada 48 pages You already know the story about Santa. You know about his reindeer and his sleigh and the toys. You know about Frosty, and Rudolph, and the elves. But what about fairies, tubas, or construction equipment at Christmastime? With these great picture books, you’ll learn fast… Everyone in Ava’s family played some sort of musical instrument and so when it was time for Ava to decide what she wanted to play, she knew immediately that she wanted a tuba because nobody else was playing one. But in “The Christmas Tuba” by Helen L. Wilbur, illustrated by Mary Reaves Uhles, Ava learns that big instruments come with big problems and she almost quits – until her music teacher, Rodney, makes a big announcement.

The Moncton Miracles of the National Basketball League of Canada announced on November 28th that they have drafted former Lewis University men's basketball standout Julian Lewis with the second pick of the third round.

The Certificate of Achievement for Excellence in Financial Reporting has been awarded to the City of Joliet by the Government Finance Officers Association of the United States and Canada (GFOA) for its comprehensive annual financial report (CAFR). The Certificate of Achievement is the highest form of recognition in the area of governmental accounting and financial reporting, and its attainment represents a significant accomplishment by a government and its management.

The Steve and Marjorie Harvey Foundation announces honorees for 2014 Gala

The Steve and Marjorie Harvey Foundation announced that it will recognize Pastor Corey Brooks, Cookie Johnson, Earvin “Magic” Johnson, Steve Pemberton (Chief Diversity Officer, Walgreens), and Clint Culpepper (President, Screen Gems) with the “Helping Hand Award” at its gala taking place on May 3, 2014 at the Hilton Chicago in Chicago, IL.

Because three organization have made donations to the matching program, shoppers who have LINK cards can buy up to $10 more.

The special deal through the Joliet Park District is available through May 30, the day before the water park opens for the season.

The special deal through the Joliet Park District is available through May 30, the day before the water park opens for the season.